Barsha*’s eyes fill with tears, but she has no strength left to cry. She gave birth two days ago, and now she has to make a decision: the businessman said that her baby girl would be fed daily if Barsha will just sell her to him. She knows she can’t afford to feed another mouth, and the sale will provide enough money to feed the rest of her family for several weeks. It sounds simple, but Barsha knows the businessman owns a brothel.

This story plays out day after day in the poorest slums and ghettos of Southern Asia. Mothers have to choose between prostitution and starvation. This should never be.

And that’s why people filled with God’s love and justice decided to do something about it.

Three decades ago, Christians living in Southern Asia came together to start a feeding program for underage mothers whose infants were dangerously underweight. This feeding program, called Thrive, is overseen by our AGW personnel and has expanded to include a sewing program so the mothers can learn a skill to support their families long after their babies have reached a healthy weight.

Every weekday, ten mothers come to the Thrive center to eat a nutritious meal and receive food to take home to their families. Their babies are weighed monthly and visit the center with their mothers until adequate nourishment yields a healthy weight. The staff conduct health seminars, and all women are given a clear presentation of the gospel.

Hridi came to the program at the advice of a neighbor. Married off at age 13 to an auto rickshaw driver, Hridi had a 7-year-old daughter when she gave birth to her son, Anik. Her husband left her and now lives with his second wife, so Hridi and her children live with her mother-in-law. Anik is 7 months old and weighs 5.5 pounds. Hridi and Anik are coming to Thrive each weekday to receive food and medical care. Anik struggles with chronic illness.

The plight of the other mothers at Thrive is nearly the same: they have been married off at a young age to rickshaw pullers who do not make enough to feed their families. They do not have enough nutrition to nurse and are too weak to perform household chores while caring for their newborns and other children. The cycles of poverty and sickness continue.

The cost to feed one mother and child for a month at Thrive is $12 – half the average amount spent by Starbucks customers in one week. The three-month sewing program costs $20 per mother. Program costs are incredibly low because the economy is weak – but these sums are unimaginable for the mothers. 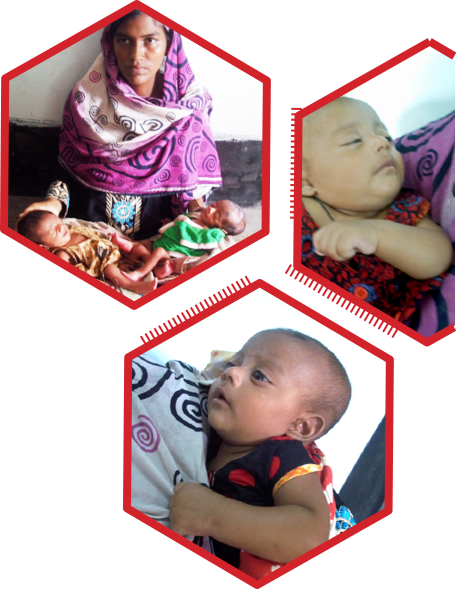 Nazia’s husband drives a taxi in the capital city while she and her two children live in a nearby village. She participated in the sewing program and received a certificate of completion, making her marketable as a seamstress in her community. Now she earns her own money and makes clothes for herself and her children. The money she makes she spends on food, so her family is no longer starving.

Mithi entered Thrive in August of this year with her twin boys, Sumon and Sohan, who were born mid-July. On the day of their arrival, Sumon weighed 5.5 pounds, and Sohan, 4.4 pounds. They were three weeks old. Mithi has two older children, and her time is consumed with caring for her family, so she cannot get a job to earn money. She has attended the program faithfully for a few months. I am happy to report that over this short time, both Sumon and Sohan have gained three pounds each and have grown two inches – all because people are giving to supply Thrive with the nutrition young mothers like Mithi need. Just $12 per month is reviving Mithi’s babies.

Thrive is located in a majority-Muslim nation. Women there are not valued as much as men and are not given opportunities to better themselves. At Thrive, women find both value and vocation; they are cared for and taught by Christians who show the heart of Jesus to Southern Asia’s forgotten women.

None of the women who have gone through the program have entered as followers of Jesus: all are either Muslim or Hindu. The staff of Thrive are often the first— and the only — Christians these women meet. Even after they leave the program, the mothers receive home visits and encouragement to attend future health seminars.

Thrive has taken up residence in a place where females are thought of as less than human. The locals know it as a Christian feeding center which showers kindness on young mothers, communicating value they do not understand. The Lord has granted favor to Thrive as it touches as many people with Christ’s compassion as it can – ten mothers at a time.

Will you consider supporting a young mother and her children this Christmas? Just $12 will feed a mother for a month, enabling her to nurse and bring her baby out of a dangerously low birth weight. Putting a mother through the entire feeding program for six months costs $72. A gift of $20 for the sewing program will keep giving, enabling women to support, clothe, and feed their children as they grow up. The health seminars educating mothers on sanitation, nutrition, and contagious diseases cost $30. Most importantly, women hear the gospel in all of Thrive’s programs.

On behalf of Barsha, Hridi, Nazia, and Mithi and the other six women who are flourishing today because of Thrive, I want to thank you for helping Southern Asia’s overlooked women and children to flourish physically and spiritually as they encounter the One who “gives justice to the weak and the fatherless; the One who maintains the right of the afflicted and the destitute” (Psalm 82:3, ESV).

(*All names changed for security)